Murdo Fraser was born in Inverness in 1965 and educated at Inverness Royal Academy and thereafter at Aberdeen University, where he studied law. He worked as a solicitor in Aberdeen and Edinburgh, and prior to his election to the Scottish Parliament was an associate with Ketchen & Stevens WS in Edinburgh, specialising in commercial law. Murdo first became active in politics at Aberdeen University. He held office as Chairman of the Scottish Young Conservatives from 1989 to 1992, and thereafter became the first Scot to be elected Chairman of National Young Conservatives, a position he held for one year from 1991.

In the 1999 Scottish Parliament Election, Murdo stood as the Conservative candidate for North Tayside, and fought the constituency again at the 2001 General Election. He became a Member of the Scottish Parliament in August 2001 following the resignation of the previous List Member for Mid-Scotland and Fife, and was re-elected in 2003, 2007, 2011, 2016 and 2021. Murdo was Deputy Leader of the Scottish Conservatives from November 2005 to November 2011 and has served as spokesman on Education, Health, Economy and Finance. Murdo was delighted to be re-elected in 2021 and is now Shadow Cabinet Secretary for Covid Recovery.

Murdo is a patron of the Scottish Asian Pakistani Foundation and of the Conservative Christian Fellowship, a member of the Scotland-Malawi Partnership and a former Board Member of Dundee University Students' Association. Publications include The Blue Book: Scottish Conservatism in the 21st Century (2006), and The Rivals: Montrose and Argyll and the struggle for Scotland (Birlinn, 2015).

Murdo lives in Perthshire with his wife and two children. His interests outside politics include hillwalking (he has climbed Kilimanjaro and more than half of Scotland's 284 Munros), football, classic cars, travel, and Scottish history.

Murdo Fraser MSP believes a newly formed campaign group is a “timely initiative” which will try to combat the rise in ‘cancel culture.’

Scottish Conservatives Murdo Fraser MSP and Councillor Chris Ahern have accused the SNP of being so arrogant that they think they know what’s best for local communities in Perth and Kinross.

Scottish Conservative MSP Murdo Fraser has raised concerns with the First Minister at Holyrood about the deaths of five people at a mental health hospital ward in Perth.

Murdo Fraser MSP is backing his party’s plans to scrap the SNP’s Curriculum for Excellence in favour of a return to Scotland’s traditional knowledge-based curriculum.

“Startling” figures have revealed that the Conservative Government of 1979 to 1997 built more miles of dualling of the A9 road between Perth and Inverness than the SNP has done.

Scottish Conservative politicians have slammed the “unnecessary” delay in the SNP rolling out its flagship R100 (Reaching 100%) broadband scheme.

Murdo Fraser MSP has suggested that the new £26.5 million museum in Perth be named after its most famous literary son, John Buchan, writer of ‘The Thirty-Nine Steps,’ among others.

Scottish Conservative MSPs Liz Smith and Murdo Fraser have expressed concerns that the HSBC branch in Perth is set to close.

The bank has announced it will shut 69 branches across the UK in July.

HSBC has said the bank closures are due to customers switching online. 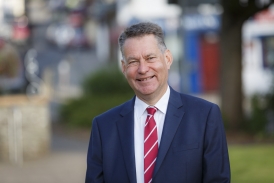