Liz lives at Madderty in South Perthshire. She was educated at George Watson’s College and holds an Honours Degree in Economics and Politics and a Diploma in Education from the University of Edinburgh.

She returned to George Watson’s College in 1983 to teach Economics and Modern Studies and in 1992 became a Fellow Commoner at Corpus Christi College, Cambridge whilst she undertook some academic research in politics. In 1998 she left teaching to work as Political Advisor to Sir Malcolm Rifkind and between autumn 2001 and autumn 2003 she was Head of the Chairman’s Office in Scottish Conservative Central Office.

Outside politics, Liz is a keen sportswoman with particular interest in cricket and hill-walking. She won seven caps with the Scottish Ladies’ Cricket XI, is a former President of the Scottish Women’s Cricket Association, and is an official Munroist on account of her completing all of the 282 peaks in Scotland over 3,000ft. She has also taken part in several mountaineering expeditions to the Alps and Himalayas.

Liz’s other interests include travel, photography, listening to classical music and cooking and writing (joint author of “Outdoor Adventures” published in October 2003 and the history of George Watson’s Ladies’ College published in autumn 2006).

Scottish Conservative MSPs Liz Smith and Murdo Fraser have expressed concerns that the HSBC branch in Perth is set to close.

The bank has announced it will shut 69 branches across the UK in July.

HSBC has said the bank closures are due to customers switching online.

Alternative plan for future of Stagecoach is backed by Perthshire Conservatives

An alternative plan for the future of Stagecoach which, if passed, would see the company retain its headquarters in Perth has been supported by Perthshire Conservative politicians.

Scottish Conservative MSPs Liz Smith and Murdo Fraser have both expressed disappointment on hearing of the job losses for OVO staff in Perth.

Liz thanks locals for helping Ukraine

Liz Smith MSP has thanked residents and businesses across Perth and Kinross who have organised a collection of humanitarian aid for those seeking refuge from Ukraine.

Scottish Conservative and Unionist MSP Liz Smith has accused the SNP of hammering hard-working individuals and businesses across Mid Scotland and Fife by introducing a workplace parking tax.

Liz Smith MSP has called on the Scottish Government to introduce a National Recovery Group after highlighting the “very low” take up of free personal care for under 65s.

Scottish Conservatives MSPs Murdo Fraser and Liz Smith have given a “cautious welcome” to a re-think by ScotRail on proposed rail timetable changes, stating they would like to see more information on them.

Statistics released this week show that since the SNP's merging of Police Scotland in 2013 there has been a reduction in police officers in Tayside.

Scottish Conservative MSPs Murdo Fraser and Liz Smith have vowed to continue to push OVO Energy on their commitment to their Perth workforce. 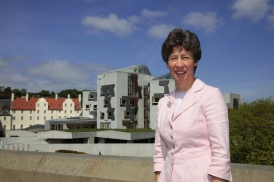