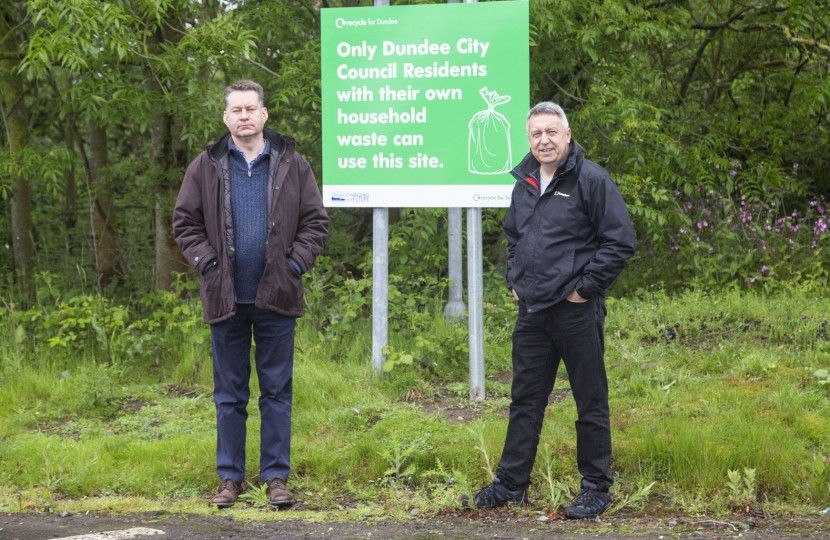 Scottish Conservative politicians Murdo Fraser MSP and Councillor Angus Forbes have slammed Dundee City Council for not allowing Invergowrie residents to use a recycling centre, despite it being on their doorstep.

Councillor Forbes, who represents the Carse of Gowrie ward, said he has been inundated with complaints from residents who live in Invergowrie, but are infuriated that Dundee City Council are taking a hard stance on only permitting people who live within their council area to use the site at Riverside.

Dundee City Council have outlined their policy on the matter, stating that Dundee is ‘unique in that it is bordered by three local authorities, with communities that are not served directly by a recycling centre within their own local council area.’

Councillor Forbes launched a petition on the matter on his Facebook page, with 89% of people stating Invergowrie residents should be allowed to use the Riverside Recycling Facility in Dundee, with 11% saying ‘no.’

Commenting, Councillor Forbes said: “I have had numerous complaints from constituents about this matter. It’s crazy for Dundee City Council to make people drive from Invergowrie to Perth to recycle their property when they have a perfectly good recycling centre right on their doorstep.

“Residents living in Invergowrie were able to use the recycling facility at Riverside up until a few weeks ago. Driving 40 miles’ round trip from Invergowrie to Perth is not a good way to reduce our carbon footprint.”

And Mr Fraser, who represents the Mid Scotland and Fife region, added: “I accept that Dundee City Council will have suffered the same Scottish Government cuts as Perth and Kinross Council but this decision is just plain ludicrous.

“To have residents who live in Invergowrie travel a round trip of 40 miles to take their recycling to Perth when this site in Dundee is on their doorstep is nonsense and very short-sighted.”

He continued: “This is the kind of situation where some flexibility is needed by Dundee City Council. Instead, they have just infuriated scores of Invergowrie residents.”

Several residents have taken to Councillor Forbes’ page on Facebook to express their anger on the matter, with one saying: “We are all residents in Scotland – which council area we live in should be irrelevant and we should be able to use whichever facility is closest.

“No danger I’m travelling 20-plus minutes to Perth or Blairgowrie when there’s one five minutes along the road.”

And another resident said: “Why have a postcode restriction at all? What’s the risk that it mitigates?”

The link for Councillor Forbes’ petition is: https://www.facebook.com/councillorangusforbes/