New Sponsor Announced for Open Studios in The Carse of Gowrie 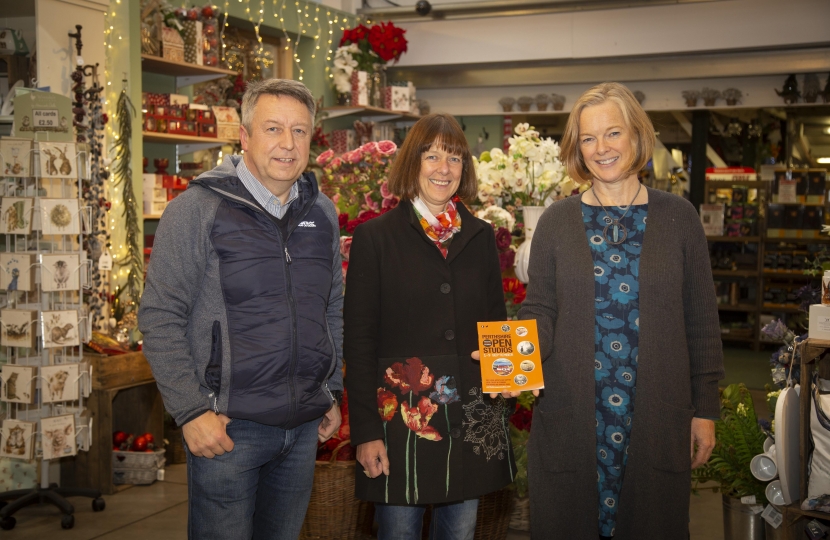 Open studios is a collaboration of artists who get together to promote themselves over a ten-day period in September each year. The concept is based on series of routes which visitors are encouraged to follow.

Open Studios for Perth and Kinross has been running for over ten years and the Carse of Gowrie currently sits in the Lime route. Over the last few years, the number of artists has gradually dropped and now there are just eight in the Carse of Gowrie.

As part of a plan to encourage visitors to stop in the Carse, rather than just drive through on the A90, Cllr Angus Forbes aimed to encouraged more artists to sign up to take part in Open Studios, with the hope that more artists would ultimately lead to more visitors and more sales, which would encourage even more artists to join the scheme, thereby reversing the current situation.

Angus felt that a well-known local sponsor could play an active part in promoting the route and would encourage more people to visit the Carse. He was delighted then when Glendoick agreed to be the sponsor, not only sponsoring the route but hosting some samples of artists' work in their coffee shop and displaying a large map of artists in their car park.

"I am truly delighted that Glendoick Garden Centre have agreed to sponsor the Carse of Gowrie Route. Glendoick is a big attraction in the Carse and brings huge numbers of visitors. Hopefully this sponsorship, along with the practical promotional help that Glendoick has offered will encourage more artists along with more visitors and I am very grateful to the owners of Glendoick for agreeing to help. For some time now I have been trying to find a way to encourage visitors to stop and explore the Carse rather than just drive by, and this is a big help with that plan."

Artist Liz Dully, the Coordinator of the Lime Route, said:

"I’d like to thank Jane Cox from Glendoick Garden Centre for agreeing to sponsor the route next year. Her enthusiasm for the project is really encouraging and the number of visitors that Glendoick attracts every week will make a huge difference to the Open Studios."

"When Cllr Forbes approached me about the sponsorship of the route I was more than happy to help; it’s a wonderful initiative to bring people to the Carse of Gowrie area to see the wonderful scenery we have to offer as well as spend some money with local businesses."

Wash your hands, cover your face, make space: the next steps in our plan for lockdown measures

Wash your hands, cover your face, make space. These are the next steps in our plan for lockdown measures.