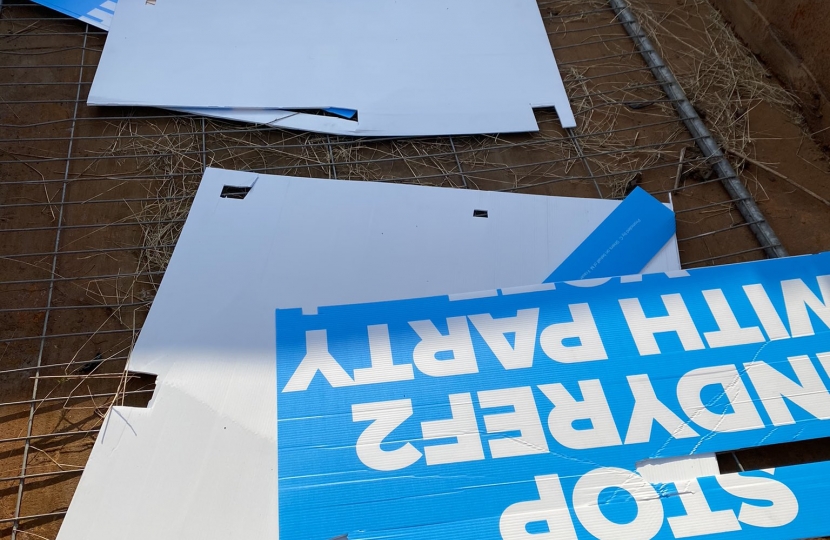 Murdo Fraser has described damage to several Election posters as “mindless vandalism” and fears it is part of a “worrying trend” of such actions.

The Scottish Conservative Parliamentary candidate for Perthshire North was commenting following the destruction of a poster put up beside the A9 Perth to Inverness road – just one of many such incidents to take pace in the build-up to the election on May 6.

Mr Fraser said: “Acts like this are just wanton mindless vandalism. The poster beside the A9 had been put up by a local farmer on his land and was pulled down and slashed within two days. We have had many other posters vandalised across Perth and Kinross during this election campaign and it is utterly shameful.

“Sadly, it is an all too familiar a story to many of us following similar scenes during the 2014 Independence Referendum and is part of a worrying trend that has seen an increase in ‘trolls’ on social media sites used by politicians.

“This has reached a sinister stage, with death threats being posted on social media to Douglas Ross, leader of the Scottish Conservatives, and veteran politician, George Galloway, for which a man has now been charged.

“I even know of some residents in Perth and Kinross who are too scared to put up posters or election flyers declaring their support for the Scottish Conservatives for fear of recrimination from extremists.

“In this country we are proud of our democratic process, but that depends on everyone being able to express their opinion without fear or intimidation. We should all be concerned if that freedom is under threat.”