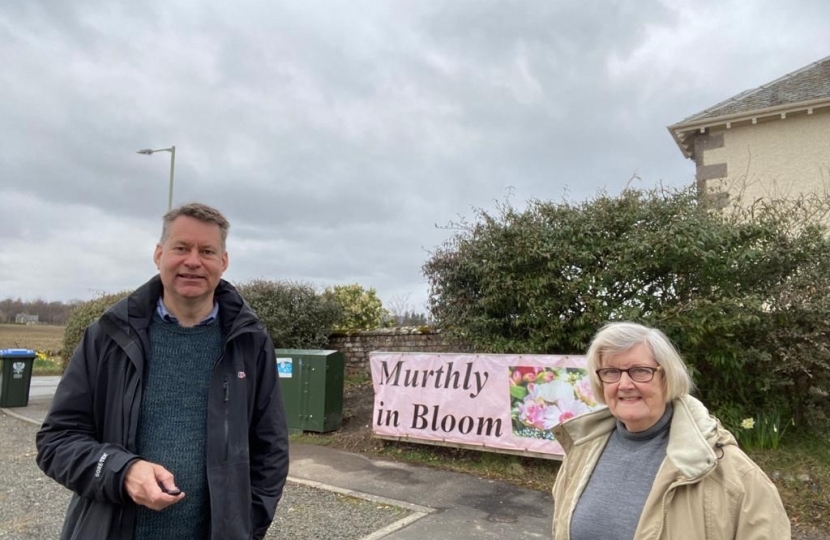 There was substantial opposition to a plan by Aviagen to build the unit close to houses and the local school, which led to a chorus of objection locally. The plans have now been withdrawn, and Aviagen have indicated their intention to come back with an alternative proposal on a different site.

Whilst welcoming withdrawal of the application, Mr Fraser believes that planning laws need to be changed to give better protection to local communities.

Commenting during a visit to Murthly with Strathtay Conservative Councillor Anne Jarvis, Mr Fraser said: "There is a great deal of opposition locally to the proposed chicken farm, and I am pleased that Aviagen decided to withdraw the application in light of this. We await seeing the revised application which will come in, which will then need to go through the formal consultation process.

"This episode highlights once again the deficiency we see in our planning laws. Too often planning applications are opposed by local communities, rejected by the local council as planning authority, and then granted on appeal by Scottish Ministers. This means that unwelcome planning developments are imposed on local communities against their wishes, and even when their elected local representatives have backed them in rejecting the unpopular plans.”

Mr Fraser continued: "It is time to end this unfairness. Scottish Conservatives are pledging in our election manifesto that Scottish Ministers will no longer have the right to override local decision-making when it comes to planning. This will give a greater protection to communities such as Murthly, and many others across Perthshire, facing unwelcome development. It will also restore local democracy and accountability which is something that too many politicians only pay lip service to."

And Councillor Jarvis added: “The application was withdrawn after discussion with the planners, but it is expected to come back in a different form. It will need to be quite different or there will be similar objections.

“Developments like this always raise the question of local democracy when there are many objections. I am very pleased that Mr Fraser has taken this on board and that the Scottish Conservatives will be looking at the question of Government Reporters overturning councils’ refusal of planning consent after numerous community objections.”